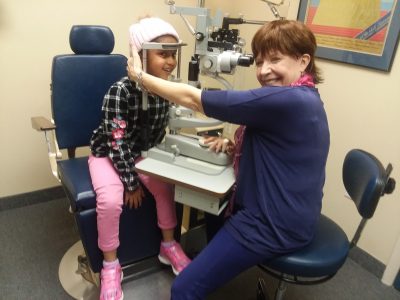 Dr. Waeltermann joined our practice in 2019. She is a Board Certified Pediatric Ophthalmologist who founded her practice, Children’s Eye Care of Catonsville in 1986.

Dr. Waeltermann was named a Baltimore Magazine Top Doctor in 2012, 2013, and 2014. She is a senior attending physician at St. Agnes Hospital where she specializes in eye problems of premature infants. She is also on the consulting staff of Greater Baltimore Medical Center. In addition, she was a teaching faculty member of the University of Maryland School of Medicine Department of Ophthalmology from 1985 to 2012.

Dr. Waeltermann is also involved in Med-Chi (the Maryland State Medical Society). In 2000, she served as the president of Baltimore County Medical Association and still makes frequent trips to Annapolis to advocate for patients.

Though she prefers treating humans, she was also a consultant to the National Aquarium in Baltimore for fish eye problems. She is a lecturer at a number of area teaching hospitals, contributes articles to WebMD and has published papers in scientific journals on children’s eye diseases and genetic eye problems. She has also participated in retinopathy of prematurity treatment studies. In her spare time she does yoga and is an award-winning knitter. She resides in Owings Mills with her husband who is the “Buddy Rich” of the big band, Shades of Blue and the Percussionist of the Baltimore Philharmonic Orchestra. She has two sons, one is an engineer at the Johns Hopkins Applied Physics Lab and the other has recently graduated from Shepherd University in environmental sustainability.